A box to tick a goal to chase a new adventure a sense of direction for my training?

all of the above 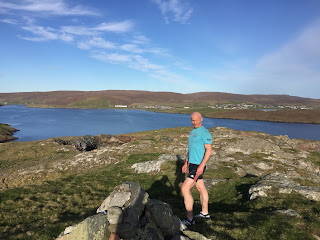 with the big daunder on hold due to covid 19 steps for the escape plan and big adventures are still taking place, baby steps compared to the original plan, but still moving forward 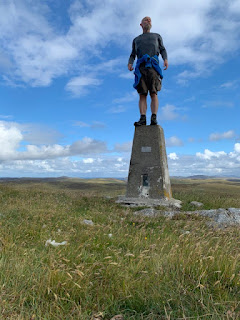 Hurda field Hill was my first trig point on Shetland, also the one I will have been on by far the most, this hill was straight across from the Moorfield hotel before it burned to the ground! I had spent half of 7 years in that hotel roughly three weeks on three weeks off for seven years, so more than a thousand nights spent in that hotel. During that time, I would go out running and or cycling most nights, heading up to this trig point was a favourite micro adventure, 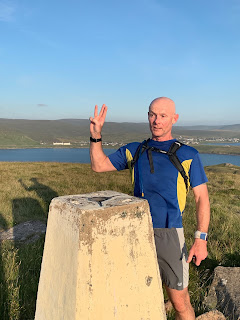 I even made a strava three peaks running route round this peak and two others either side of mavis grind, calling it the Moorfield three peaks challenge, which I would also occasionally drag some work colleagues’ round. 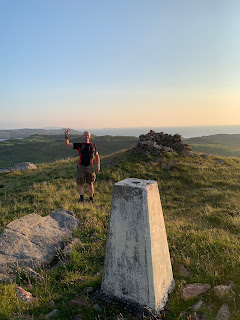 My second trig point peak was Shetlands biggest hill Ronas hill first done with gary park and the two colins, way back in December 2014 nearly six years ago, on that occasion we got lashed by heavy sleet and had zero view, 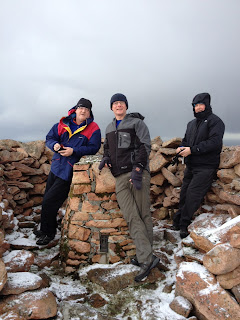 but then this glorious sunny day out in 2020, A day out cycling from the Moorfield and back in glorious sunshine 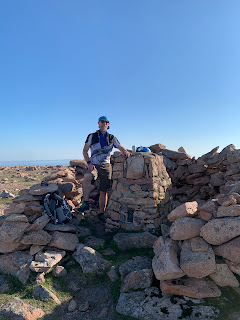 My third peak/trig was done as part of a big run from my worksite up over the crooksetter hill which is on the approach road to work SGP, then I ran past the monument four way valve thing, I then ended up on the ferry to yell road somehow? and had to run back down to the town of Mossbank, then up to hill of swinster 139meters where the trig point is, and an interesting old building that’s collapsing built for the airfield of scatsta during the war at a guess, choosing to then run over the ridge and peat hags back to the Moorfield hotel the hard way, it was a tough but rewarding run 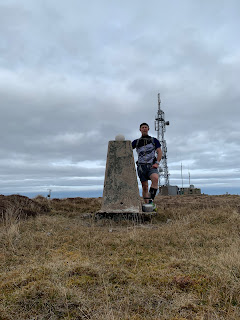 The hamars of Burraland what an impressive name for a hill! but it’s not a big one, it was also easy to get to, but for me this was a wee landmark? as it was the first peak that I actually chose to start ticking of the Shetland trig points, It was still lockdown we were at work nightshift I had ran all the streets of brae (over three nights its not a big place) once that box was ticked, I then ran all the local trails that I hadn’t done before and made up a few new one, I needed a new challenge as the gym was still shut I was starting to feel like a hamster on my wheel in a cage, I had no events to train for due to the cape wrath ultra being postponed, I had a full year with an empty schedule of events! What to do now? AJ in the office told me his aunt and uncle had been ticking of all the trig points on Shetland and PING, I had the map out that day and night having a scan around, there were plenty doable trigs from the accommodation while still doing my shifts, I love having boxes to tick this was the start, the very next morning I asked my work mate robbo who is a keen wildlife photographer, was he going out to take photos after work? he had access to transport, yep he was yah beauty, I chose this hill as my next trig and first of the proper box ticking, the plan was he dropped me off, I ran to the peak and then I would run back along the main road, while he went and done his photography then pick me up on his way back, I would be running at the side of the road by then, and that’s what we done the funny thing was as I ran along I seen some crested divers near where he picked me up, when we got back to the hotel he told me what he was trying to take pictures of some crested divers that had been spotted, but he couldn’t find any he was raging when I told him yeh those crested divers were at that bit where you picked me up lol 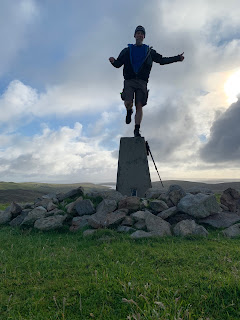 5&6 White grunafirth-173mtr & hill of ollaberry  - 119mtr for grunafirth we parked at a very remote area called heylor with good views over to Ronas voe and Ronas hill, robbo took plenty cool pictures, I had a fair trek to get into this hill and up onto the ridge, first of all choosing to go north to septa field hill to be sure I was on the right hill, then back along the ridge to the trig 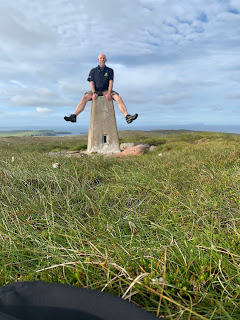 and down to meet robbo again, who by then had been taking photos of an old sheiling, I showed him on my map an easy hitter we would be virtually driving past on the way back, on a high road called hill of ollaberry he said he may even walk this one with me, he started but at the first fence crossing decided his old knee wouldn’t cope, good views over to work and sullum voe from the trig, I wish Robbo had done it I’m sure he could have done managed it, it would have made good photography among the bog cotton 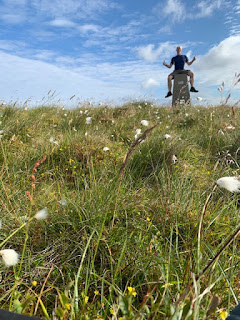 7&8 Hostaberg 197 mtr and the dudd 90mtr this was a cracking morning out after work in glorious weather – first off all the road we drove to the first trig was actually through a tree tunnel at one part, some people think you can’t grow trees on Shetland this is a lot of lies probably started by the sheep farmers, who kill any chance of trees, I have ran through woods on Shetland which are really cool the trees are small which makes it even more appealing, wherever there is no sheep trees grow, there was a parking view point looking way out toward Sumburgh from a high point, marked on the map as a viewpoint not far from where robbo dropped me off, he went back there to take in the view, while I trudged ran bounced and hopped all the way up to the trig, to be rewarded with cracking views and a truly fun run back down, with perfect timing to meet robbo and move on, 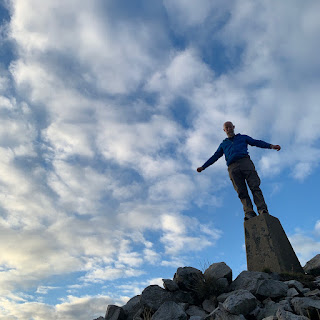 next we wanted our photo taken at the sign for the town called Twatt, when we found it the sign was not like the ones I had seen in photos? that’s because the signs I had seen were for twatt Orkney I felt a right twat (pun intended) the Shetland town of twat didn’t have its own sign! still we had fun pointing at each other at the sign 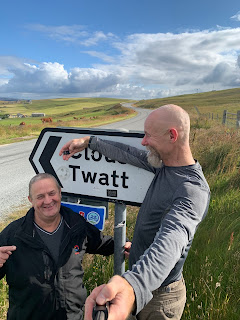 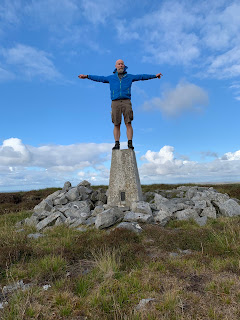 we left there and were on our way back, robbo spotted some ponies and asked if I minded him stopping to take pics of Shetland ponies which of course I didn’t, the ponies it turned out were in a field attached to Shetlands famous honesty cake fridge, this cost me £20 in cakes the prices were on the cakes, I had only notes so bought £20 worth and shoved the note in the honesty box, there was some vegan ones suitable for me so it was worth it,( robbo gave me halfers also) the route back then went over what’s known locally as the Aith alps back, which is very scenic route, all in all a rewarding morning for everyone

Sae breck 62mtr this trig is at Eshaness near the lighthouse which was built by the Stephenson family, which was a coincidence at that time as I was planning doing the Stephenson way route of kidnapped, I had been to eshaness before to see the impressive sea cliffs listen to the cannonball chute, and perhaps one day I would like to visit the huge sea cave,  this time robbo dropped me off and went away orca hunting, the jungle drums (AKA group chat) had been going mental a pod of orcas were out following the coast, robbo had his good camera at the ready. I first of all visited a graveyard I was passing! Another new habit! After running to the trig 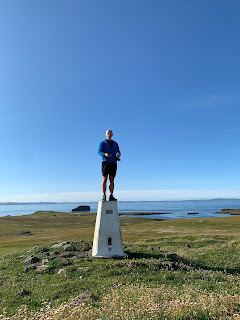 I went to the lighthouse car park and spoke to some other folk out to get a look at the pod, robbo met me there he had just missed the pod round the coast, we were in luck here as the pod were passing and we had a good vantage point, we photo’d the orcas and then drove round the bay to where we hoped they would come in even closer (they never) when we parked we met a bloke called Steve who was a professional wildlife photographer, the three of us walked out over some sea rocks and sat for ages chatting waiting for the orcas that never appeared, it was all a good morning though 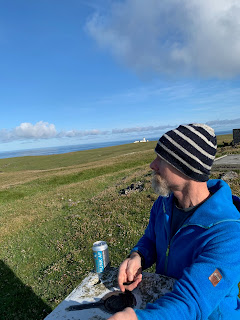 Sneugie 219mtres – this peak high above the fishing village of voe commands fine views I like voe the harbour is obviously at sea level where the pierhead bar and bakery is then the town itself rises up steeply in both directions from the harbour at least 50mtrs up each way steeply to the roads in and out. A proper crossroads town four ways – scott drove from work. he dropped me off and then went off  with his camera, I ran up to the peak and back, it was nice views but I had the scoots it was a quick up and down before dinner, scared to be too far from a loo too long and no trowel with towel to hand! 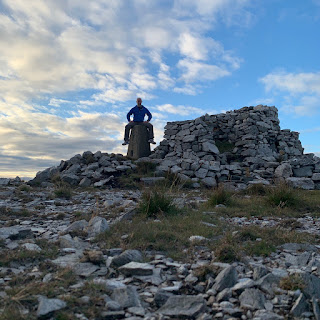 Posted by Kenny Alexander at 1:43 AM